Explore with us the breathtaking Neuschwanstein castle, which was the model for Walt Disney and the Hohenschwangau Castle. Together with you, we go back to the time of King Ludwig II. and discover his enchanting buildings around Füssen. 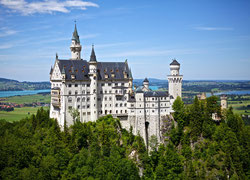 Neuschwanstein skip-the-line tour
Enjoy this guided small group tour to the Neuschwanstein castles and have a wonderful day at the Disney castle. With this tour you don't have to worry about anything as the skip-the-line ticket is included. Also the local guide, who speaks 3 ... (Read More)
From 19,90 € 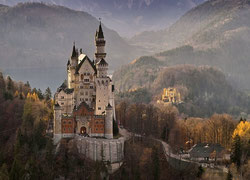 King Ludwig the second, once also called fairy-tale king, was born in 1845 at Nymphenburg Castle. As a visionary and passionate castle builder, the king will always be remembered. He commissioned the construction of incredible castles, such as Neuschwanstein Castle, Herrenchiemsee Castle and Linderhof Castle, which attract thousands of people to our beautiful Bavaria every day. With our tours Neuschwanstein tickets and Hohenschwangau + Neuschwanstein tickets you get closer to the king than ever before.

King Ludwig II, the eldest son of Crown Prince Maximilian, was born on 25.08.2018 in Nymphenburg Castle. Already with 18 years, on 10 March 1864, when his father Maximilian died of a normal illness, Ludwig was appointed king of Bavaria.

As a big fan of Richard Wagner he supported the composer financially and was partly responsible for the financing of the music drama "Der Ring des Nibelungen". King Ludwig was very interested in art, music and was also very committed to the promotion of culture. King Ludwig even had complete Wagner victims performed without an audience. He also supported and financed the Richard-Wagner Festspielhaus.

King Ludwig the Second was a very peaceful man and wanted to keep out of the German War of 1866 between Austria and Prussia and behave neutrally. However, Austria insisted on the observance of previously concluded contracts and thus Bavaria was forced to fight on the Austrian side against Prussia. From childhood the king was not militarily minded and let his ministers take the decisions of war policy. At that time he himself went to Switzerland to meet Richard Wagner.

In 1868 the king described in a letter to Richard Wagner his ideas for the construction of a new castle Hohenschwangau, today Neuschwanstein Castle. The king was inspired by his travels to paris, Versailles and the Wartburg Castle in Eisenach, which later became the model for Neuschwanstein Castle.

On 8 June 1886, King Ludwig the Second was declared mentally disturbed and curable in an expert opinion and on the basis of testimony and without a personal examination. His doctor, who stood by his side all these years, was not heard. At this time the king was absolutely accountable what his last official actions prove. On 9 June 1886 Ludwig was incapacitated from his office.

On 12 June our king was brought at 4 o'clock in the morning by a commission to castle Berg, at the Starnberger lake. After a walk in the castle park with his former doctor of Gudden, the former king never returned. The king's body was found floating in the water a short time later.

are on the list of the world cultural heritage of the UNESCO to be registered.

However, Neuschwanstein Castle, which was dedicated to the works and life of Richard Wagner, was unfortunately not entered by him.

King Ludwig was very concerned that the costs for the building did not burden the Bavarian people and paid his building projects even from his own private property and his income as a monarch.

When the king died in 1886, Neuschwanstein castle was still not completed. The king never wanted to make his castle accessible to the public, but only 2 months after his death the castle was opened to the public and visitors could visit the castle for 2 marks. With the income of the visitors at that time a part of the credits was repaid. First the visitors were allowed to move freely in the castle Neuschwanstein, which unfortunately resulted in the furniture wearing out very fast. Already in 1886 a first castle guide appeared.

The castle Hohenschwangau, the yellow castle or as it was formerly called "Castrum swangowe" is located in the district Hohenschwangau and is exactly opposite the castle Neuschwanstein.

When King Maximilan II ascended the throne in 1848, Neuschwanstein Castle served the family as their summer residence and was the nursery of their two sons Ludwig II and Otto. The later King Ludwig II, who was responsible for the construction of Neuschwanstein Castle, spent his youth here. Together with his brother and his mother Marie of Bavaria he often undertook mountain hikes around Hohenschwangau.

Even after the death of his father and during the construction of his own castle Neuschwanstein, King Ludwig II spent a lot of time in Hohenschwangau Castle from 1869-1884. In Hohenschwangau Castle, however, it remained as it was, that the only thing he had rebuilt in this castle was his own room. In 1864 he had a group of rocks built over which a waterfall flowed, as well as an apparatus for creating an artificial rainbow and a night sky with moon and stars. After the death of her son, however, the mother had the room rebuilt to its original state.

Half of the Singers' Hall is currently scaffolded. A part of the scaffolding is provided with a semi-transparent, printed screen, so that one can get an impression of the wall surface in spite of ongoing restoration work, how it should look later without scaffolding.

The Marien Bridge in Winter

Please note that the Marienbrücke bridge, which is located behind Neuschwanstein Castle, must be closed during the winter months, depending on weather conditions. You are welcome to contact us and we will be happy to inform you whether the bridge is closed or not. Access with the Neuschwanstein tickets and the guided tours are not affected.

Renovation work on the gate construction

Worth knowing about the visit of the Hohenschwangau & Neuschwanstein castle

Depending on the weather, there are three ways to get to Neuschwanstein Castle from the car parks. Of course our guide will accompany you, but we still want to give you this information.

1. By walking, in this case a path of about 1,5 km must be walked slightly uphill. The duration is about 30-40 minutes.

3. By bus, the bus ride costs uphill 2.50 euros and downhill 1.50 euros. The buses are not available all year round, depending on the weather. Please note that you still have to walk 15 minutes from the bus stop to the castle.

Neuschwanstein castle and Hohenschwangau castle can only be visited as part of a guided tour with tickets.

German and English-speaking visitors can buy guided Hohenschwangau & Neuschwanstein tickets, so the staff of the Bavarian Palace Administration will guide them through the castles. For all other visitors, accompanied audio guide tour tickets for Neuschwanstein and Hohenschwangau in Japanese, French, Spanish, Italian, Czech, Slovenian, Russian, Polish, Chinese (Mandarin), Portuguese, Hungarian, Greek, Dutch, Korean, Thai, Arabic and Hebrew are offered.


All guided tours through the Hohenschwangau and Neuschwanstein castle lasts about 30-40 Minutes.

With thousands of tourists per day, it is important that you prepare your visit to the castle well. Neuschwanstein tickets are limited and available in the following ways:

What could also be interessting

In the future we will also offer hikes to Neuschwanstein Castle, which will be online from May-June. Be excited about what we will prepare for you.